From Wikipedia, the free encyclopedia

The History of Ottawa, was shaped by events such as the construction of the Rideau Canal, the lumber industry, the choice of Ottawa as the location of Canada’s capital, as well as American and European influences and interactions. By 1914, Ottawa’s population had surpassed 100,000 and today it is the capital of a G7 country whose metropolitan population exceeds one million.
The origin of the name “Ottawa” is derived from the Algonquin word “adawe”, meaning “to trade”. The word refers to the Indigenous Peoples who used the river to trade, hunt, fish, camp, harvest plants, ceremonies, and for other traditional uses. The first maps made of the area started to name the major river after these peoples.

For centuries, Algonquin people have portaged through the waterways of both the Otawa River and the Rideau River while passing through the area. French explorer Étienne Brûlé was credited as the first European to see the Chaudière Falls in 1610, and he too had to portage past them to get further inland. No permanent settlement occurred in the area until 1800 when Philemon Wright founded his village near the falls, on the north shore of the Ottawa River.

The construction of the Rideau Canal, spurred by concerns for defense following the War of 1812 and plans made by Lieutenant Colonel John By and Governor General Dalhousie began shortly after September 26, 1826 when Ottawa’s predecessor, Bytown was founded. Lt. Colonel John By was an officer of the Royal Engineers commissioned by the British Government in 1826 to superintend the construction of the Rideau Canal.

In 1854, Bytown was created as a city and its present more appropriate name, Ottawa was conferred. Shortly afterward, Queen Victoria chose Ottawa as the capital of Canada; and the parliament buildings on Parliament Hill were soon completed. Also at this time, increased export sales led it to connect by rail to facilitate shipment to markets especially in the United States. In the early 1900s the lumber industry waned as both supply and demand lessened.

Growth continued in the 20th century, and by the 1960s, the Greber Plan transformed the capital’s appearance and removed much of the old industrial infrastructure. By the 1980s, Ottawa had become known as Silicon Valley North after large high tech companies formed, bringing economic prosperity and assisting in causing large increases in population in the last several decades of the century. In 2001, the city amalgamated all areas in the former region, and today plans continue in areas such as growth and transportation. 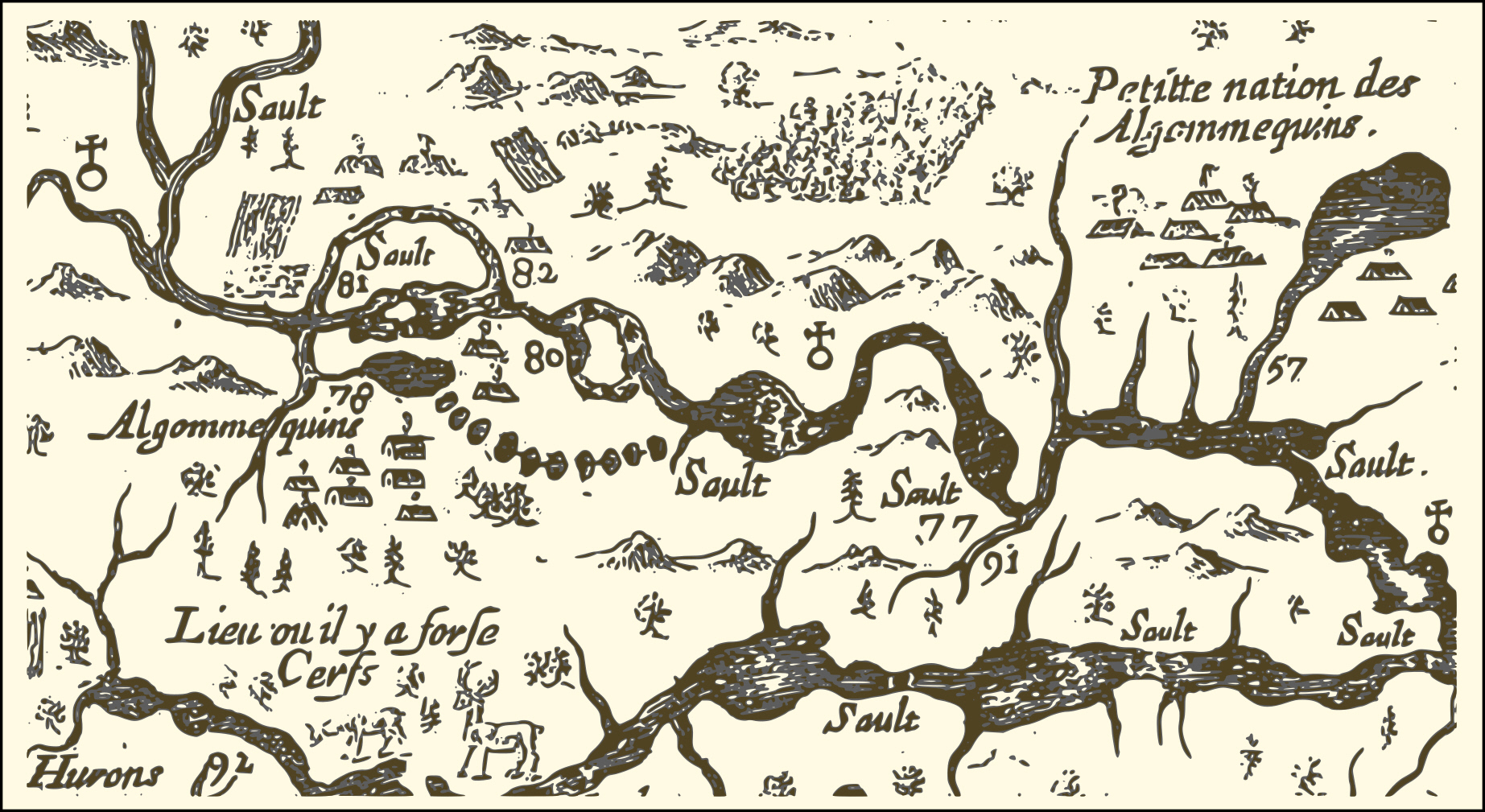 Above is an extract from a map created in 1632 by Samuel de Champlain of the eastern reaches of New France. It shows a portion of the Ottawa River route he took in 1616, with numbers used to indicate sites he visited, significant rapids and aboriginal encampments. Numbers 77 and 91 correspond to the locations of the modern-day City of Ottawa and the Rideau River respectively; # 80 marks the location of the large rapids south of Calumet Island; # 81 shows the site of Allumette Island inhabited at the time by members of the Algonquin nation; # 82 corresponds roughly to the location of the modern-day village of Fort Coulonge, and an Algonquin settlement that existed at the time of Champlain’s travels. 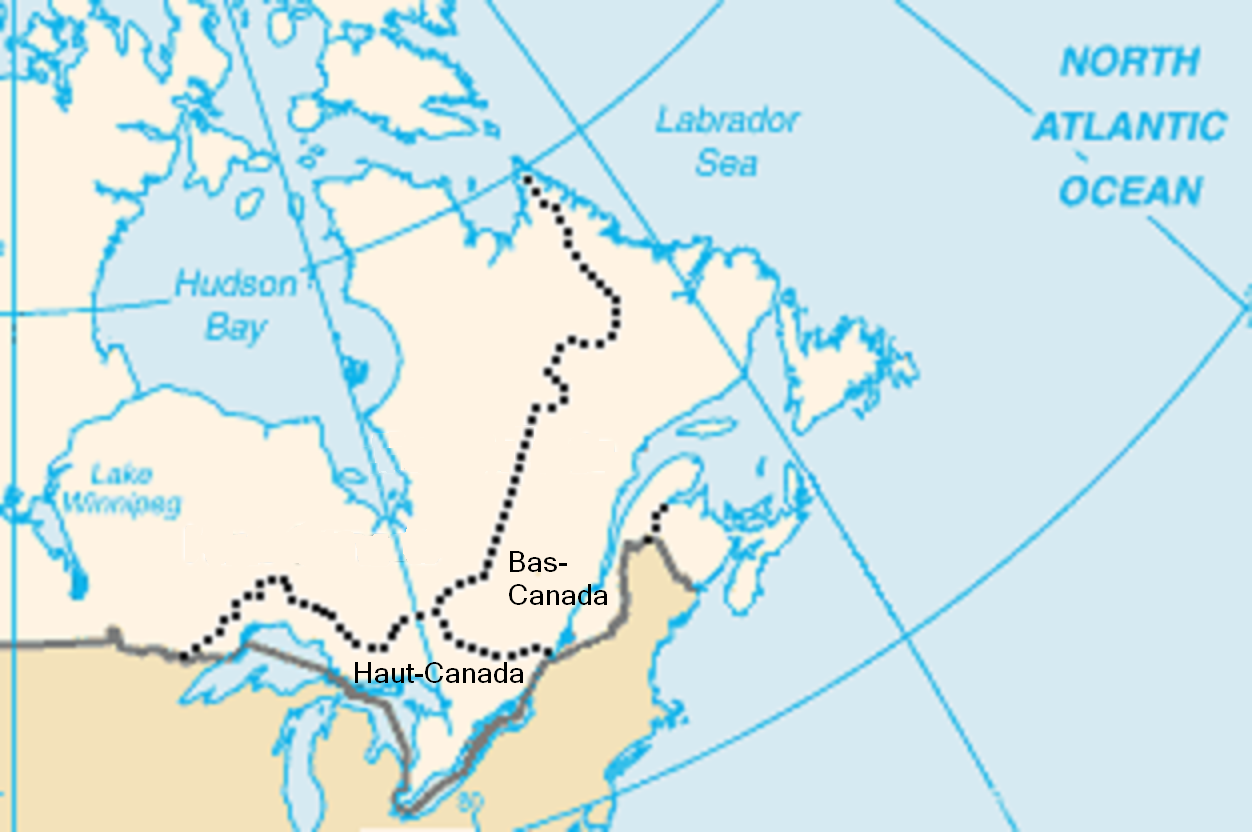 The Constitutional Act of 1791, established Upper Canada and Lower Canada which would last from December 26, 1791 to February 10, 1841. By this time two culturally distinct regions were forming; Loyalist Protestant American settlers and British immigrants in Upper Canada and a French-speaking Catholic population of Lower Canada. This essentially meant that the creation of the two solitudes led to the bisecting of the Algonquin Nation. Upper Canada had its own legislature and was administered by a lieutenant-governor (starting with John Graves Simcoe). Its capital was settled by 1796 in York, in present-day Toronto, a choice which was influenced by the threat of attack by the Americans, which also was a factor initiating the construction of the Rideau Canal. By the time settlement started near Ottawa, there were two principal local areas, Nepean Township west of the Rideau River and Gloucester Township to the east. Though not yet named, they were formed in 1793. 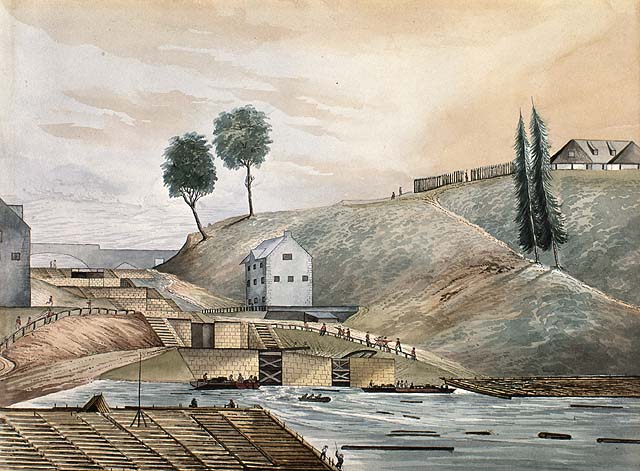 Entrance to the Rideau Canal 1839

In 1826, eight locks were constructed by the Royal Engineers with labour provided by the new Irish and French settlers. The building in the foreground is today called the Bytown Museum. On the right is Parliament Hill at the time named “Barrack Hill”. 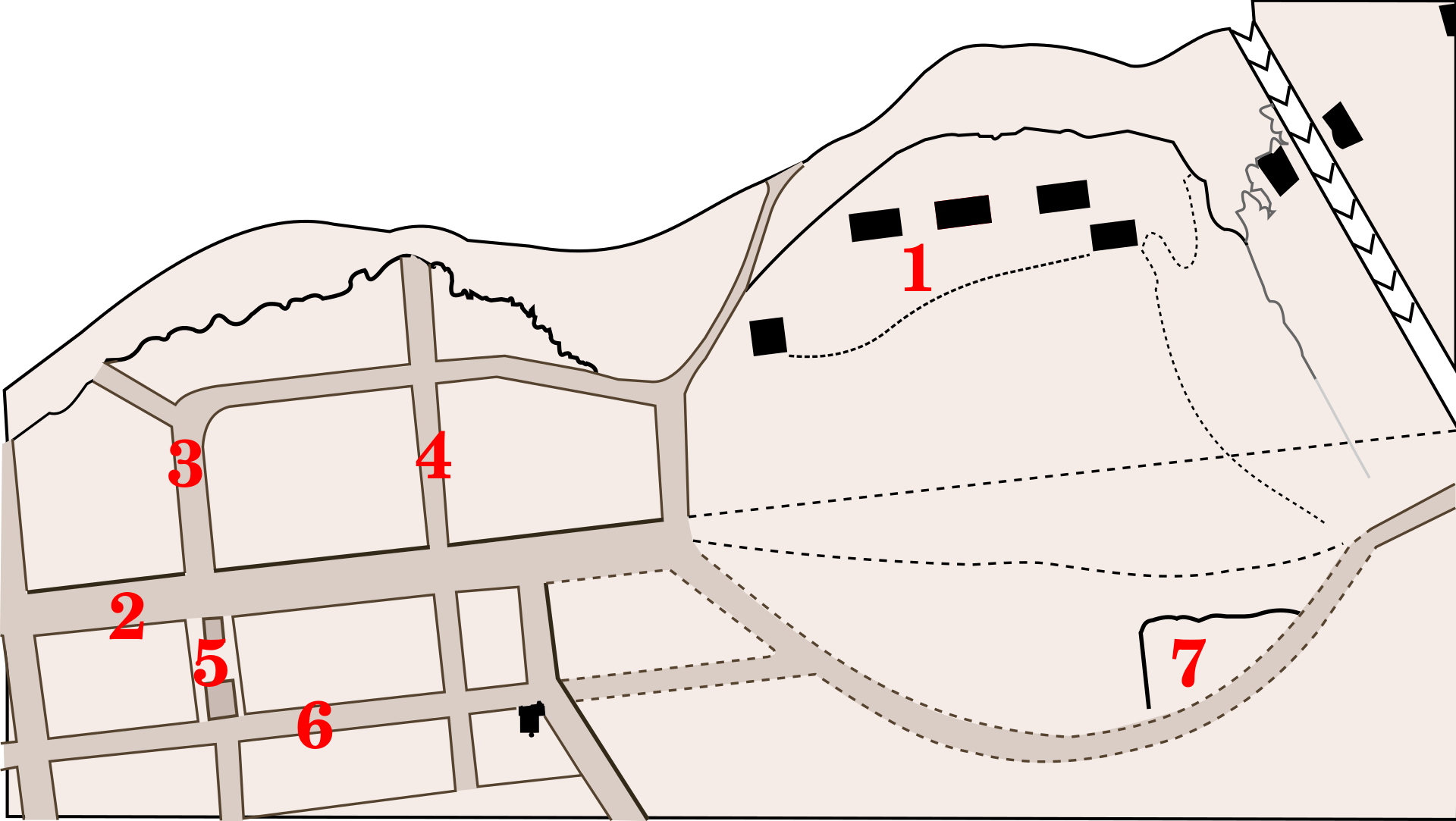 The Rideau Canal is on the top right. Wellington St. was incomplete, and a path formed a bulge instead leading to Sappers Bridge over the canal.

The hill is the second highest landmass jutting into the Ottawa River on the right. It still contains barracks here, its last year with them, for construction of the Parliament Builds is about to begin. The Union Bridge is in the foreground, but its main span has been replaced, after many years of ferry service only, with a steel suspension bridge. 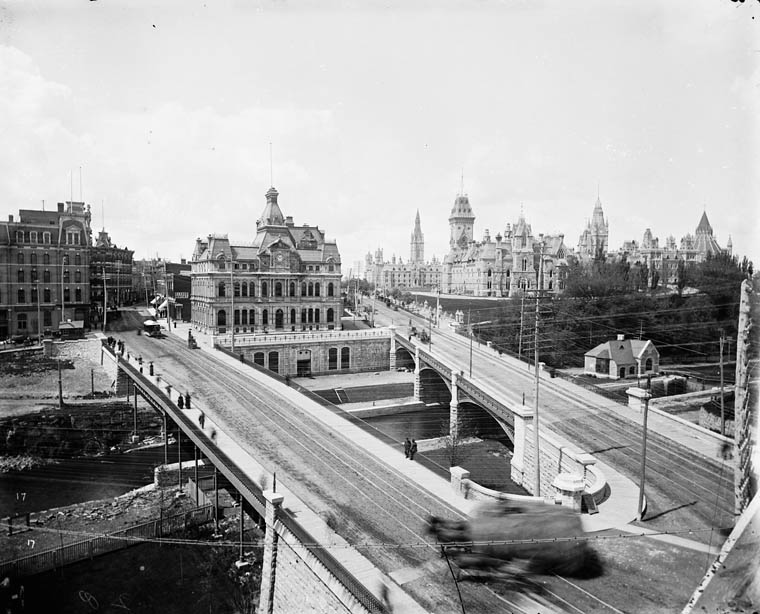 Sappers Bridge(left), Dufferin Bridge(right) over the Rideau Canal, 1890s. Today the War Memorial stands where the post office stood, with a new post office (now also old) on Sparks Street. The two bridges were replaced by the Plaza Bridge (Ottawa), and filled in. The centre block of the parliament buildings was replaced after a 1916 fire. 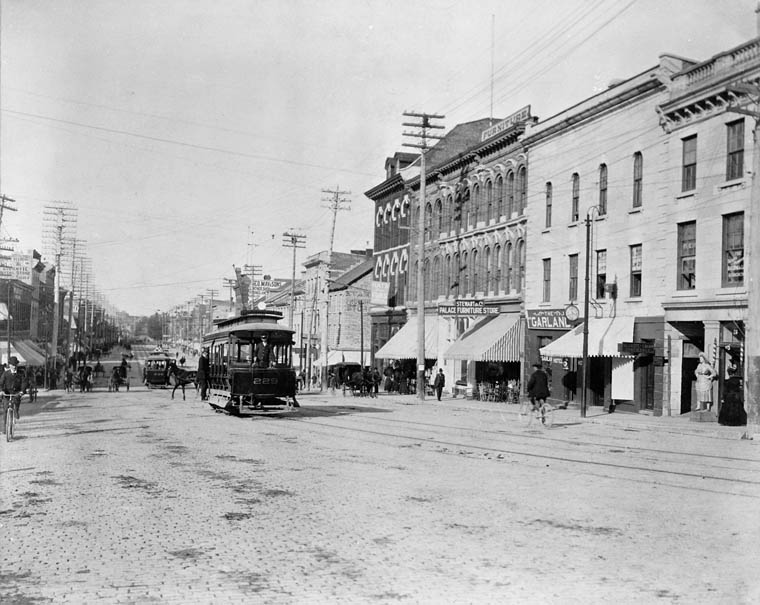 Map of the City of Ottawa Insurance Plan, 1888–1901 with business names and locations indicated

The Hull-Ottawa fire of 1900 destroyed two thirds of Hull, including 40 per cent of its residential buildings and most of its largest employers along the waterfront. The fire also spread across the Ottawa River and destroyed about one fifth of Ottawa from the Lebreton Flats south to Booth Street and down to Dow’s Lake.

The Centre Block of the Parliament buildings were destroyed by fire on February 3, 1916. The House of Commons and Senate were temporarily relocated to the recently constructed Victoria Memorial fire of 1900 Museum, now the Canadian Museum of Nature. A new Centre Block was completed in 1922, the centrepiece of which is a dominant Gothic revival-styled structure known as the Peace Tower located on Wellington Street.

Ottawa’s industrial appearance was vastly changed due to the 1940s Greber Plan. Later powers were given by an act of Parliament to the newly formed National Capital Commission (NCC) to attain ownership of lands, and effect vast changes. Some of the results of these were the National Capital Greenbelt, expropriation of areas in the downtown, the removal of large industrial areas, the removal of downtown railway tracks, the relocation of the train station out of downtown, and the creation and maintenance of areas that would provide the nation’s capital with a more attractive appearance. 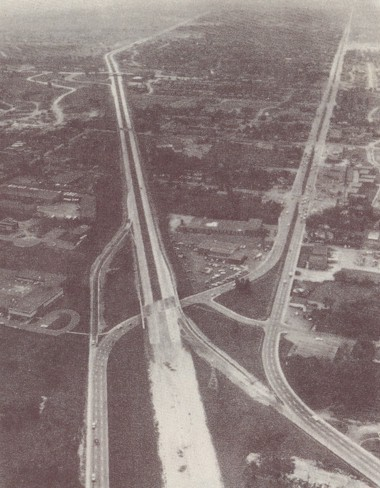 Collaboration between the city and NCC’s predecessor, the Federal District Commission also led to major water and sewer projects, the construction of the Queensway which had been the old GTR/CNR right of way, several bridges, expansion of Carling Avenue, and the offer of F.D.C. land at Green Island (near Rideau Falls) to create city hall, opened in 1958. Until then, the city had been without a permanent building for around 17 years. It was in use until 2000, when Ottawa City Hall occupied the former headquarters of the municipality.